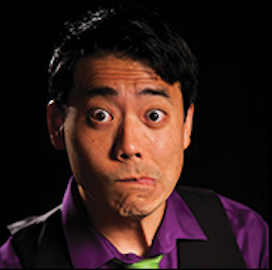 Jamie is an Atlanta based comedian, who was adopted from Korea, but not sure which one. He is a US Army veteran, who served in Afghanistan, as well as an adventurer who has been bull riding, dog sledding, and loves ballroom dancing. Most recently, Jamie and his friend took a 10 day trip, driving through all 48 of the contiguous states in just over 240 hours. His comedy is autobiographical and reflective of his over complicated approach to life’s simplicities. He’s done a lot of dangerous activities, but the thing he fears most, is trying to talk to women.

Jamie Ward has been featured on FOX, HULU and can be heard on XM/Sirius Satellite Radio. He regularly performs at comedy clubs across the country as well as touring internationally, including performing overseas entertaining our deployed US servicemen & women. He just finished up headlining the Bahamas Paradise Cruise Line ship, MS Grand Celebration. Jamie just finished filming for an upcoming show on E! and will be on an Amazon Prime taping in October.