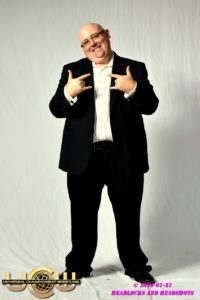 You must be logged in to view this profile.
Duluth
,
Georgia

Vinny has been performing on the comedy circuit since 2006. His observational material about his life, family, and what's going on in the world combined with his storyteller personae have made him a fan favorite. Based out of Atlanta, Georgia, he has performed in Comedy Venues across the country and is known for his time on The Regular Guys radio show, hosting his own podcast show The Boochcast and starring in the Adult Swim TV Show Daytime Fighting League. He also starred in the hit Adult Swim Documentary “Booch Eats A Car.”
Vinny still continues to perform and entertain in various genres and currently works at Universal Championship Wrestling where he works as a Broadcast Commentator for FITE TV and is also the company’s Ring Announcer. He also co-hosts another podcast with Wrestling legend Buff Bagwell called The Buff and Boochcast where they interview Wrestling superstars such as Diamond Dallas Page, Lex Luger and Sting just to name a few.