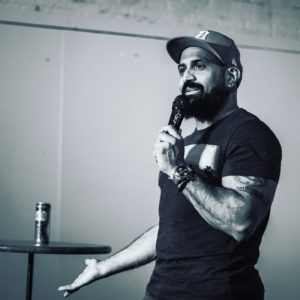 You must be logged in to view this profile.
Los Angeles
,
California

After a tour in the Marines as a trained killer - Mike Eshaq never got to kill anyone! Bummer. So… he traded his rifle in for a microphone!

Some venues Mike has performed in have been Mark Ridleys Comedy Castle, Funnybone, Cleveland Improv, The Dirty at 12:30 and Rick Bronsons House of Comedy to name a few.

You might have seen him in comedy TV shows and films such as ‘Detroiters’ on Comedy Central and 'Grace and Frankie' on NETFLIX. He's a self taught filmmaker directing many short comedy sketches since 2004, like the award winning video "MTV Cribs - Arab American Style” and the web-series The Ed and Moe Show. He continues to create videos on his Instagram and YouTube pages. Mike also produced hit reality TV shows like Swamp People on History Channel.

Mike has a unique angle in his comedy being Middle Eastern, serving as a United States Marine and being a Muslim who can’t stop eating bacon.