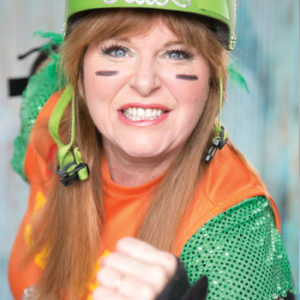 You must be logged in to view this profile.
Pasadena
,
California

Hey there, I’m Marilyn Monrovia. I’m an actress, comedienne all-round entertainer working and living in Los Angeles.
With her long red hair, piercing blue eyes, and fair skin, Marilyn Monrovia is a natural beauty. She is a former PLAYBOY bunny, a stand-up comedienne/actress, and a domestic abuse survivor/advocate. This woman was destined to leave her small Midwestern town and so something with her life. Marilyn was born in Emporia, Kansas ("halfway to everywhere"). Emporia is the exact halfway point from all the north/south and east/west borders of the U.S. She grew up in Ft. Worth Texas as a Girl Scout and member of the Texas Girls Choir. She attended high school in Aspen, Colorado. When Arny Freytag and a crew were in town doing a piece called "The Women of Aspen" for PLAYBOY in 1983, they saw Marilyn hitchhiking by the side of the road in the winter. They were so awestruck by her they drove their car two blocks in reverse to go back and ask her to be part of the pictorial.

Marilyn went on to study dance at the Dallas Cowboys Cheerleaders Dance Academy and competed in the Mrs. Oklahoma pageant, She auditioned to be a pro football cheerleader with the Cowboys 4 times- but the NFL team never hired her. After learning the art of Master Shoeshine Valet in the Ft. Worth Stockyards, she started her own Bunnyshines Shining Star Shoeshine Company that extended into 10 Western dance halls in Dallas. Later, she toured 18 cities with Monsters of Rock as a removable tattoo vendor with Bob Rock. Once she arrived in LA. She thought it would motivate her to get her SAG card if she located her shoeshine business in the foyer of Marie Calendars restaurant, right next door to the Screen Actor's Guild headquarters on Wilshire Boulevard. Several long years later, thanks to Andy Fickman she became SAG accredited. Along the way, she may have gained some weight but she also developed an uncanny knowledge of Calendar's delicious pies.