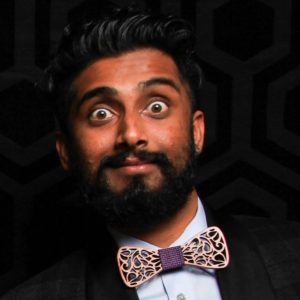 Karthik is an Indian born stand-up comedian based in NYC. As a tax paying, "resident alien" living and working in NYC, he has a lot of opinions and a different perspective on everyday things people take for granted in the "first world" and he shares them through his comedy! Karthik's comedy comes from his life experiences and observations. His comedy is clean, nuanced, humorous, insightful, and at times dark(ish) but never obscene!

He has performed at the Burbank Comedy Festival, opened for Trill Comedy Festival and he did a residency at Broadway Comedy Club and Greenwich Village Comedy Club in NYC. He might be terrible at small talk but you can count on him to tell people that Santa doesn't exist!