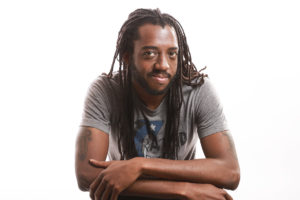 Julian is an incredibly likable guy who says horrible things about everybody. A self-described "token minority," Julian was on his way to becoming a Baptist minister before he discovered how hilarious and gay he is. For the last 11 years, he’s brought unfiltered laughter to audiences of all backgrounds, even though he fits in with none of them.

In 2017, Julian signed with Uproar Records, the same label that recorded Richard Pryor’s first 12 albums, and taped his live comedy album – Insert Token – to a standing ovation at the Comedy Underground in Seattle. It can be heard on Sirius XM (Kevin Hart's LOL Radio and Raw Dog Comedy) and is available everywhere music is sold.

Julian recently made his big-screen debut as a writer and performer in Out on Stage: The Movie, available on Amazon Prime, a feature film highlighting the diversity and talent within gay comedy. Julian is also featured in the follow-up TV show, Out on Stage: The Series, the first-ever stand-up comedy series featuring all queer comedians. Optioned writer, stereotype buster, recovering a cappella singer, Julian lures audiences in with his laidback style, then takes them on an unexpected but always hilarious journey.