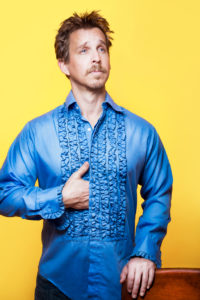 Jason's mix of colloquial philosophy and absurdist observation have made him a must-see for comedy fans of all ages. His standup has been described as “…like getting the best advice you’ve ever gotten…from the dumbest guy you know.”

He has headlined all over the US and performed abroad for the troops throughout Europe and Afghanistan.
His standup album, “Force of Nurture” debuted at #1 on iTunes and is available wherever you listen to comedy.

Besides standup, he is also an actor/writer/creator of the current Comedy Central series, “A Cowboy Explains…” his voice can be heard in the video game, Red Dead Redemption 2. He can also be seen in the Wu Tang Clan Series on Hulu, in Orange is the New Black or 30 Rock, or in commercials he’s done including Napa Auto Parts, Toyota, & GEICO (Witch in a Broom Factory). He has also been in various sketches on Comedy Central, Funny or Die and YouTube. You probably haven’t seen most of those.

You can find out more about Jason by visiting his website at Jason-Salmon.com or His YouTube Channel (Jason Salmon) or by following him on Instagram or Twitter (@JSalmonComedy for both) or…you know…just write him a letter.