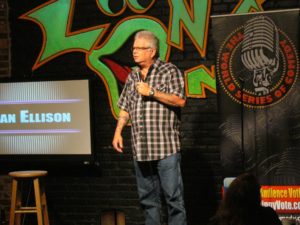 You must be logged in to view this profile.
Virgnia Beach
,
VA

Dan began his life in a place that may be considered by many to be the basis for much of his strange view of life; Parkersburg, WV. After graduating high school, he moved to the state of Ohio to attend college and received and electrical degree that, oddly enough, contributes to his comedy. While it may have taken him a while to start his comedic career, after stepping on stage in December 1988 it didn’t take him long to discover that this is what he was meant to do for a living. Now, after over 1,600,000 miles and performing in 44 states and in over 1,000 clubs across the United States, he has honed his act to a broken beer bottle’s edge.
His comedy reflects his experiences growing up in West Virginia, with stories of things he used to do mixed with his personal views on EVERYTHING from politics to women to kid’s toys. Previously, Dan has had the privilege to work some of the greats, such as Ron White, Alan King, Josh Blue, Jim Breuer, Joe Piscopo, Bobcat Goldthwait, DL Hughley! His acts can appeal to many different audiences, from whistle clean comedy to some stuff as dirty as any bar will allow. If down to earth humor is what you desire. Dan Ellison is EXACTLY what you need!