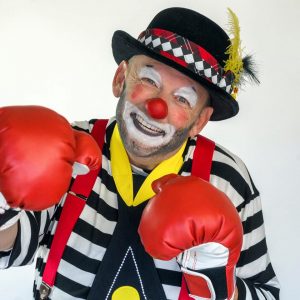 You must be logged in to view this profile.
Phoenix
,
AZ

Born at a young age to much older parents, Bullseye The Clown has been performing for over 30 years. Not always as a clown or as a stand-up comedian, Bullseye even had a stint teaching drama classes for prison inmates. He now hits the stage with a whole new brand of comedy. He has performed at the Las Vegas Comedy Festival and The Boston Comedy Festival in addition to appearing at The New York Comedy Club, The Funny Bone, The Cleveland Improv, The Comedy Zone, just to name a few. Bullseye The Clown is the host of the Youtube show, BULLSEYE ON BULLYING. But beware....venues have been known to collapse after Bullseye has performed there...(remember The Stardust Casino and The Riviera in Las Vegas?? Need we say more?)